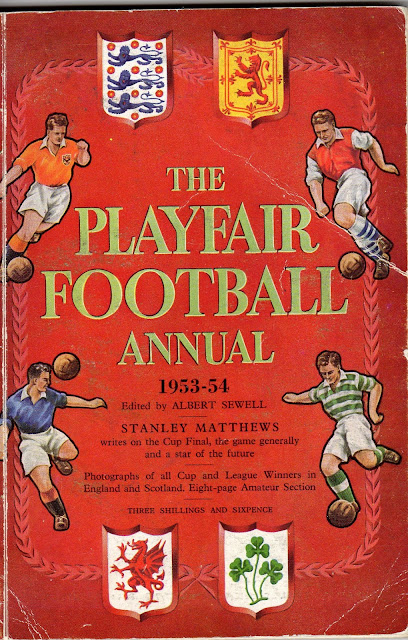 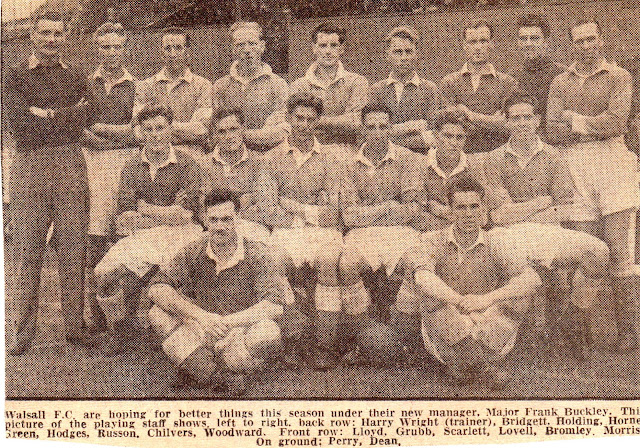 Walsall with only two points from nine matches and still with out a win were bottom of the table and Southampton with fifteen points from nine matches were top. Southampton had scored twenty five goals against Walsall's five. However it proved to be a real turn up for the book as Walsall not only outplayed the Saints but should have more the the one goal. Slynn, a left half signed from Bury, made an excellent debut.  The other player making his first appearance, amateur centre forward Bailey from Darwen, although rather small, chased everything and was unlucky not to score.

The two wingers were Walsall's main weakness, possibly because Morris was playing on the wrong flank. Horne and Flavell stood out in defence and both Dean and Bromley played well but tended to hang too far back. After many near misses Walsall took the lead with ten minutes left to play and what a remarkable goal it was. 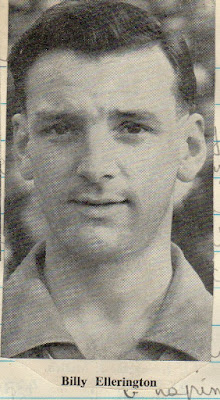 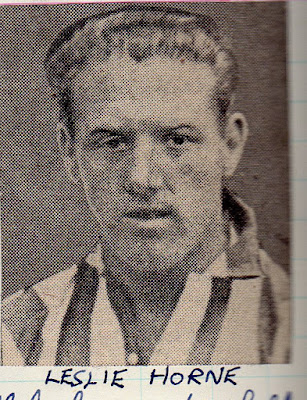 Horne took a free kick on the half way line, kicking up the slope, and hit hard into the penalty area. Everyone, inlcuding goalkeeper Christie, misjudged it and the ball sailed into the net to the great jubilation of players and spectators alike. 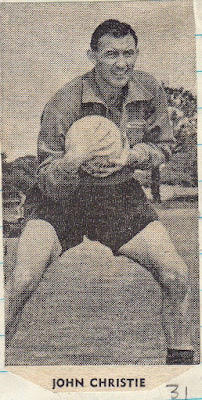 Ellerington, the former England international full back outclassed the rest of the Southampton side, especially the half back line which was often far to vigorous in the tackle. Williams, the former Herefored inside foward, had their best chance when, with only Flack to beat, he failed to place the ball and the goalkeeper made an excellent save.

This was a meeting of two teams who had to apply for re-election to the Third Divsion at the end of last season and which found Walsall still occupying the last position, despite gaining a valuable point at Colchester on Saturday. R. Burgess, an amateur centre forward from Scotland, who scored at Colchester, retained his place. New faces in the Shrewsbury side this season include Maurice Candlin from Northampton and Les Johnston from Stoke City.

The game proved to be very scrappy, the main cause of this being the inability of both forward lines to shoot. Both defences played well with Bridgett outstanding for Walsall, although Horne did not seem quite at home at full back. The Shrewsbury half back line dominated the midfield play, with Bullions, the former Derby County player, as good as ever, Candlin completely blotting out Burgess and Crutchley turning in a good performance against his former team.

Walsall's weakness remains at inside forward and although young Lloyd showed promise on the left wing, one shot of his hit the post, he does not yet appear up to the standard of league football. Walsall's best scoring attempts came from their full backs during the second half. First Flavell, the Worcestershire cricketer, ran right through at amazing speed and let fly a terrific shot from twenty yards range which passed only two yards  wide of the post. Then Horne came upfield for a corner which Morris placed perfectly for him, but McBride leapt to his left to save the full back's header.

For Shrewsbury Brown was an enthusiastic leader but lacked finish and could not round off some clever movements started by Johnston. Fisher was a lively winger and had the best shot of the game for Shrewsbury which went just over the bar from an angle. 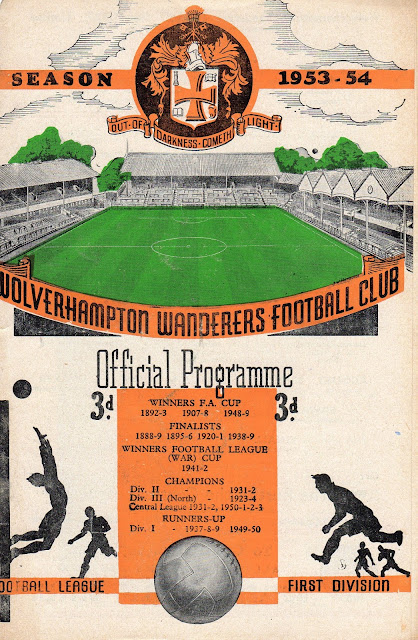 Referee:- A. Hughes, Stoke on Trent

Haddington, the Rest's right back was soon prominent, always making good use of the ball. However just as the combined side were seeming to get together Spencer was injured and moved to outside left. Wolves now went into action and when Stockin pushed a Clews centre to the unmarked Smith, Wood made a very good save from a terrific drive, just managing to push it round the post.

Jack Taylor the former Luton and England B inside forward opened the scoring for Wolves following a similar move when Stockin deflected Clews' corner with his head. Wolves were having nearly all the play now and went further ahead when Smith crashed in a penalty after Haddington had fisted out a header from Clews. The Rest with Wood of Barnsley as substitute for Spencer scored just before half time when Walker put May clean through to beat Sims easily.

A'Court and May were the Rest's best forwards but they all lacked shooting power. How to shoot was well demonstrated by Wolves amateur centre forward Doug Taylor when he scored a splendid goal just after the interval. Taking a return pass from Clews, he headed the ball to his feet, held off the challenge of two defenders and gave Wood no chance of saving. The Rest immediately went down the field and scored themselves through Wood of Barnsley after his first shot had been blocked by Gibbons.

There was only one phase of the game in which the Rest excelled over the Wolves and that was in the distribution of the ball by their defence. Wood, a very promising goalkeeper indeed, always threw, or made a short kick, to an unmarked man. Gibson gave a sound display at right half, Woods was a competent centre half but Straw despite demonstrating clever ball control could not shoot.

This was the third year in succession that Wolves have been Central League champions.

LEAGUE DIVISION ONE AT THE HAWTHORNS, WEST BROMWICH. 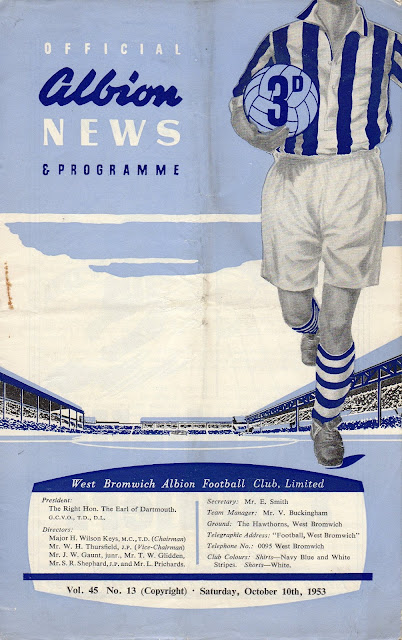 Albion have started the season in great form and head the first division table with twenty points from twelve games, two points more than today's opponents who are second in the league, a great start for the newly promoted side. Huddersfield were forced to make a change in the defence which had done so well last season, George Howe deputising for the injured Kelly at left back. Ray Barlow was acting as reserve for the England team against Wales and Billy Brookes made his first team debut at left half for Albion. 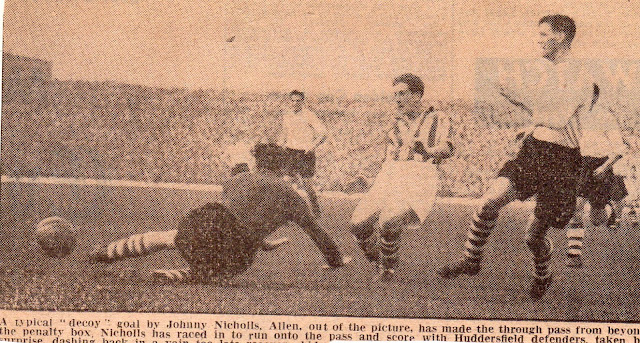 The league leaders were the first to attack and Allen put them ahead after eleven minutes with a tremendous shot from outside the penalty are. After thirty minutes a through ball from Allen gave Nicholls the chance to score his fourteenth goal in thirteen matches this season. Huddersfield gradually settled down and played some clever football, but their weakened defence was not too happy against the clever Albion forward line, brilliantly led by Allen; The Albion centre forward nearly got another when Staniforth and Mills left the ball to each other but his shot curled just wide of the post. 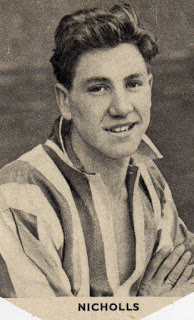 Brookes, who was doing well in his first game, twice went through on his own and had accurate shots well saved by Mills. Allen got his second goal after eighty one minutes from Griffin's pass and four minutes later completed his hat trick from Lee's centre.

Huddersfield's approach play had been good, but they lacked finish. Glazzard and Watson were the best forwards, as Metcalfe had an off day. Quested had a splendid game at left half, and McGarry, McEvoy and Staniforth all played quite well. Howe was a poor deputy for Kelly. 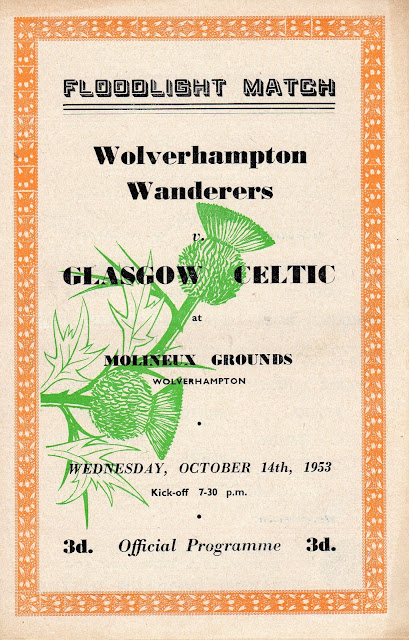 This match was a wonderful spectacle with Wolves in their brilliant, luminous yellow shirts and Celtic in their famous green and white hoops, both playing grand football. With better finishing there could have been a lot of goals. Wolves brought in seventeen years old Tipton lad Bobby Mason and he showed great promise, going near to scoring on several occasions.

Although Celtic were without inside left Charlie Tully and centre half Jock Stein, their forwards combined cleverly and their defence was very compact. England' left wing pair, Wilshaw and Mullen, were blotted out of the game by man of the match Bobby Evans, the brilliant red haired Scottish international wing half, and full back Mike Haughney. Hunter played well in goal and after a slight injury was replaced by reserve full back Alex Rollo for a period of five minutes during the second half. However the emergency goalkeeper was not called upon to touch the ball during his brief stay.

The visiting forward line showed up very well with the possible exception of Jock McPhail who proved a little slow against the quick tackling Wolves defence in which reserve full back Bill Guttridge was the only misfit. Bill Baxter, a late selection, gave a sound display against his fellow countrymen. Billy Wright was, as usual, magnificent, but on this occasion even he was overshadowed by Bobby Evans.

For all the good football the game looked like ending goal less until Dennis Wilshaw scored two goals, both from close range, in the last minutes of the game to give Wolves a somewhat undeserved victory, although Hancocks, Swinbourne and Mason had all missed good scoring chances previously. 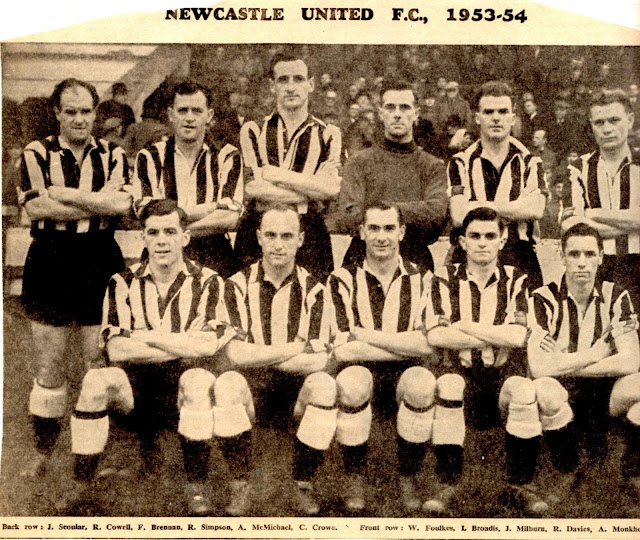 Villa did almost all the attacking during the first half but could not finish off their movements, partly because of the strong Newcastle defence. Batty had a grand game at left back (he has recently displaced Irish internation Alf McMichael) and was unluckily injured and had to be led off the field. Villa took the lead shortly before half time when Walsh pushed Blanchflower's pass to Tommy Thompson who hit it into the net, thus having the pleasure of scoring against his old team. 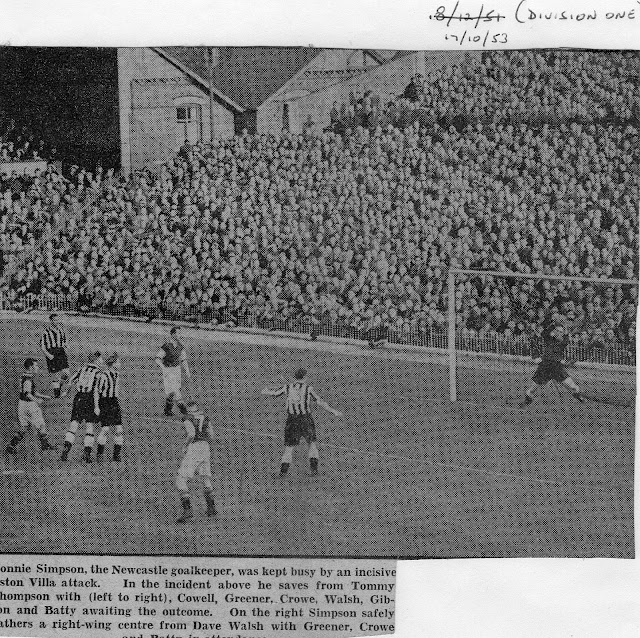 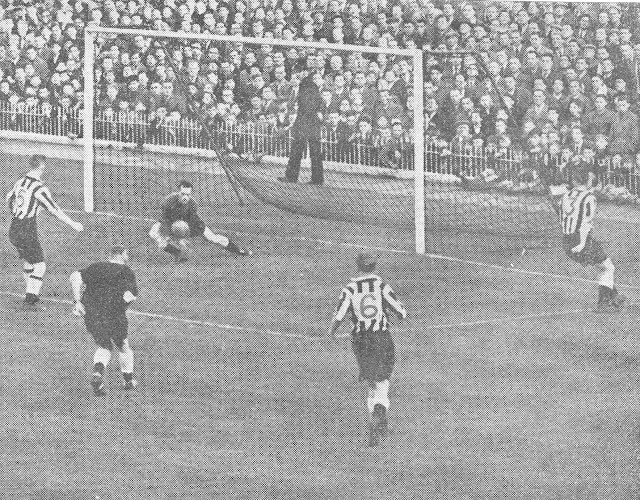 After the interval Batty resumed at outside left but could only limp along, a complete passenger. Roberts did well on his first appearance of the season  for Villa, as did Dave Walsh, but the two inside forwards both tried to do too much. Blanchflower on the other hand gave his usual skilful display, always choosing the right moment to part with the ball. 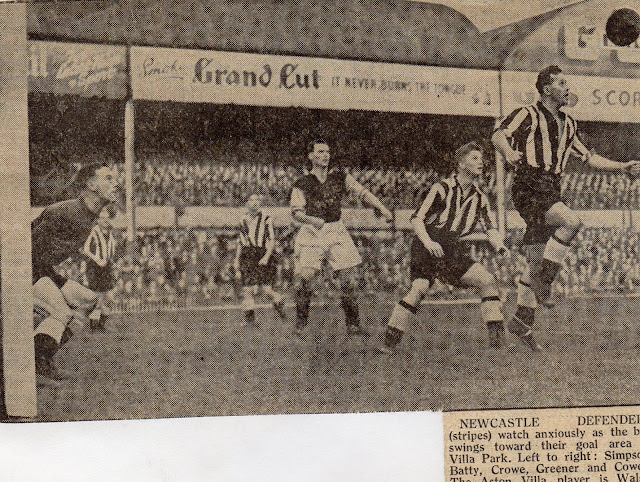 A five minute spell midway through the second half completely altered the game. During this period Newcastle scored twice. The first was scored by Jackie Milburn, who sent in a grand thirty five yard shot which caught deputy goalkeeper Parsons unawares and passed under his body. The second goal had no element of luck about it and was splendidly conceived and carried out. Mitchell, the Scotsman's Stanley Matthews, now operating in the inside left position put a perfect through pass down the centre for Welsh international Reg Davies to race on to and crack in a rising shot from the edge of the penalty area which Parsons never saw.

Scoular was an inspiring leader for Newcastle and young Greener proved a most capable deputy for Brennan.