A large crowd saw Villa through to the next round in a rather dull affair which
provided little in the way of entertainment. Dixon, in the unfamiliar role of centre forward, scored the first goal and Tommy Thompson the second. These two were to become regular fixtures and goalscorers from the inside forward positions.

Burnley showed little in attack despite the presence of Irishman Jimmy McIlroy but their defence looked  solid for most of the game with seven players of the 1947 cup final team when they lost 1-0 to Charlton. One of the newcomers is centre half Tommy Cummings who looks a fine prospect having taken over the position from Alan Brown.

Villa will be hoping for an extended cup run to compensate for their rather disappointing league form this season.

A last minute choice at centre half for Blackpool was Jack Ainscough, playing his first league match. He played with the coolness of a veteran and completely subdued the dashing Swinbourne. Wolves has nearly all the play in the first half and Walker put them ahead after only eight minutes. This followed a period of hectic defence by Blackpool in which three shots were charged down on the line.

After this however, despite Hancocks' trickery on the right wing, Wolves could not penetrate the strong defence, in which every member, particularly Ainscough, played well. Goalkeeper George Farm did well also making several brilliant saves.

After twenty seven minutes Stan Mortenson equalised with a grand goal. Alan Brown pushed the ball down the centre for him to run onto and going at full speed he outpaced the entire defence before crashing the ball past Bert Williams. Stanley Matthews had a very quiet game on the wing for Blackpool.

Since the last home game with Exeter, Walsall had suffered two more away defeats at Ipswich and Bournemouth, which meant that they were now only above bottom club Crystal Palace on goal average. Efforts had been made to strengthen the side and to day saw the debut of William O'Neill an Irishman signed from Burnley. A native of Cork, he was previously with Chelmsford and Belfast Celtic.

Another newcomer was centre forward Jack Winter, a 22 year old from Sheffield United. Sutcliffe was given a rare opportunity and Allison, the former Reading winger, was also given an opportunity in a much changed side. 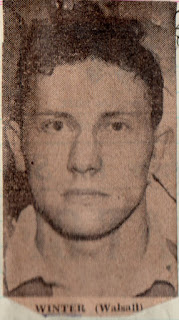 Gillingham, had been re-admitted to the Football League this season after going out in 1937-38. After struggling early on they appear to have turned the corner and last Wednesday broke their league scoring record by beating Exeter 9-4. Lewis who got three earlier in the season against Walsall got another hat-trick.

Apart from a short spell at the opening of the second half there was not a goal look about Gillingham today. It was their defenders who took most of the honours. They gave a gallant display against a lively Walsall attack, greatly improved by the inclusion of O'Neill and Winter. It took the newcomers some time to fit in with the rest of the forward line and before a working understanding had developed Gillingham went ahead with a snap goal by Lewis early in the second half.

The other Lewis, the Walsall goalkeeper, kept out terrific shots by Burtenshaw and Thomas. Then the Walsall forward settled down. In the 68th minute Bowen swung over a high centre which Gage failed to gather and Winter whipped the ball into the net. Six minutes later O'Neill sent Allison away on the left and his accurate centre was headed in by Winter to give Walsall two very valuable points. 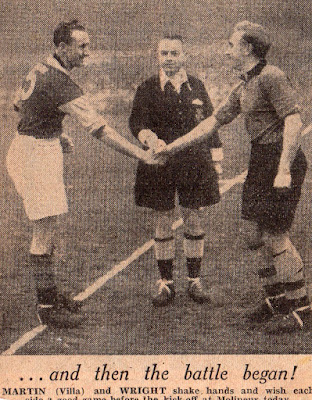 The turning point of this game, or perhaps the end of the game as far as Aston Villa were concerned, came after thirty four minutes play. Wolves were then leading 2-0 and Villa were awarded a penalty for an alleged foul by Crook. Skipper Con Martin, instead of entrusting his penalty expert Dick Dorsett with such an important kick, decided to take it himself. He shot hard and low for the corner of the net to Williams' right, but with a fantastic leap Williams threw himself across goal to save. 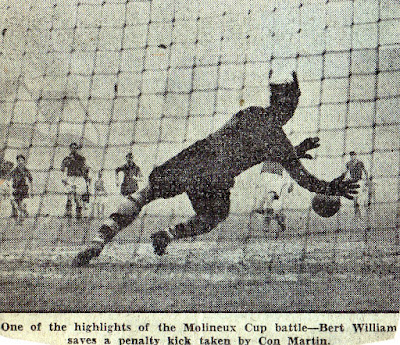 Wolves had taken the lead in twenty eight minutes through Johnny Walker, after a powerful drive from Hancocks had rebounded from the crossbar, and add it to it three minutes later. Swinbourne beat Martin and although the linesman raised his flag, the referee waved play on and the centre forward put the ball in the net despite Villa's protests. Half time Wolves 2 Villa 0.

Dixon scored for Villa two minutes after the interval, but despite good play by Thompson and Smith, Villa could not score another. Mullen sealed Wolves victory with a powerful first time shot following a Hancocks free kick seven minutes from time.

Parsons deputised for Williams in goal for Wolves and although he cannot wholly be blamed for this surprise defeat he was obviously nervous and this seemed to be communicated to the rest of the defence.

Wolves, fifth from the top, had a score to settle with Charlton, fifth from the bottom, as the Londoners had beaten them earlier in the season. However, Wolves were denied their revenge and Charlton became the first side to take four points from Wolves this season.

For the first ten minutes of the game Wolves attacked strongly and with the Charlton defence looking anything but confident it seemed as though Wolves would win easily.
However, Gordon Hurst, the balding outside right, suddenly emerged from his own half with the ball, swept past a couple of defenders in midfield and was away on his own with only Parsons to beat. The deputy goalkeeper seemed undecided on what course to take and stood rooted to his goal line when he should have advanced and Hurst placed the ball past him easily for a grand goal. 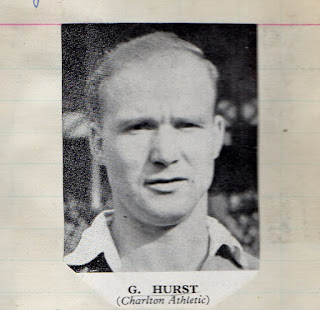 That was the only score up to half time, but after the interval Charlton confirmed their superiority with two more goals in the 49th and 73rd minutes. Both of them scored by their new Swedish international centre forward Hans Jeppson. Wolves finally got going after the third goal and hit back strongly with goals by Walker and Mullen, but by then it was too late and Charlton had brought off a famous victory.