Wolves started off on the attack. After about ten minutes, Smith had a centre-cum-shot which Robinson fumbled on the line and Broadvent pushed it into the net. Wright was outstanding  yet again for Wolves and Shorthouse blotted Robledo out of the game completely.

After twenty three minutes Wolves scored again, left back Batty diverting a  shot from Mullen into his own goal. Robinson played well after his early blunder and made some good saves. Hannah was the best of the Newcastle forwards together with Prior in flahses. Swinbourne led the Wolves line with styloe and made Robinson (who resembles Bolton's Stan Hanson) make several flying saves. 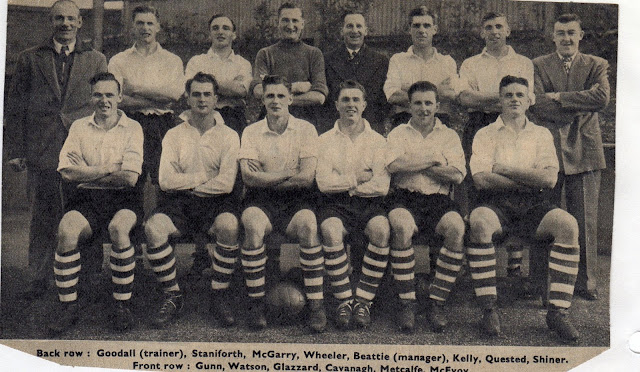 Huddersfield dominated the game in their change strip of white shirts, and thoroughly deserved to win. All the team played well, but only Badham on the Blues side enhanced his reputation. He blotted out Glazzard for most of the game.
Wheeler made some good saves against his old team, Staniforth was outstanding, McEvoy played very well and Watson was very good with his head, scoring the first goal from a Metcalfe centre. 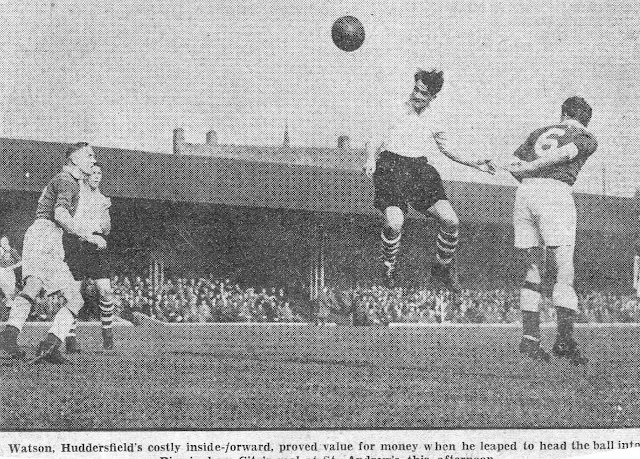 
Glazzard scored the second in similar fashion and Tommy Cavanagh proved a very good deputy for
Willie Davie. Metcalfe was very elusive on the left wing and sent some excellent centre as well as making good use of the long cross-field pass, as did Alastair Gunn on the other wing. Stewart was the liveliest Blues forward but Purdon was right off form, as was Boyd.  Referee R.J. Leafe kept a tight hold on proceedings. 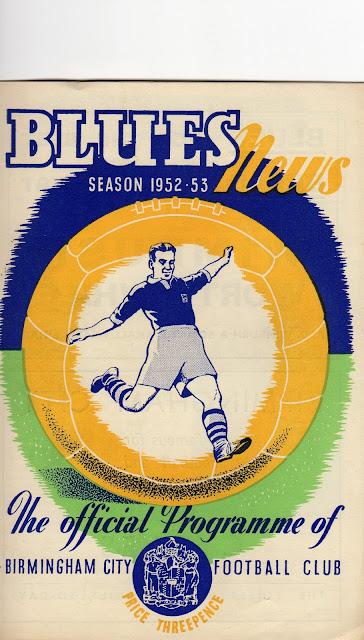 Boro' set the pace with a much changed side, winger Edwards moved t centre forward with 17 year old Lawrie coming in on the right wing. Edwards tried hard and headed in a corner from Mochan,which Williams fumbled, to give the visitors the lead. Leslie Smith deputising for Hancocks on the right wing for Wolves crashed in the equaliser after Mullen had taken the ball to the goal line before centrering to the unmarked Smith. 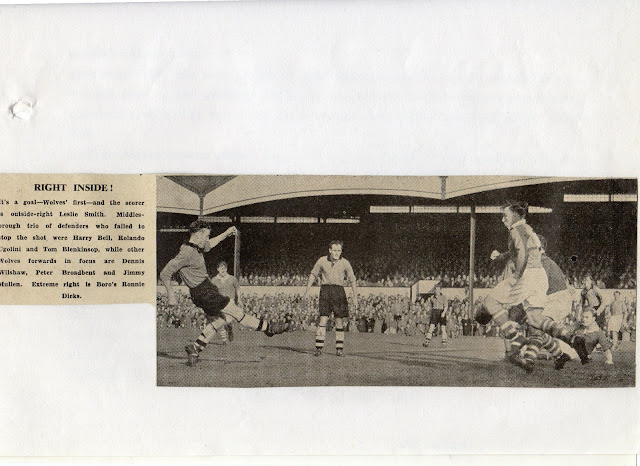 Ugolini made some good saves, especially one from Broadbent. Wolves went ahead again when Swinbourne headed in a Mullen corner. Then Wilshaw did likewise to make it 3-1. Boro' seemed to have gone to pieces and Wolves piled on the pressure with Smith in brilliant form. Pritchard at right back however was often shaky against the youngster Lawrie.

In a sensational recovery Boro' scored twice in the last minutes! In a goalmouth scramble Williams made a terrific save from Fitzsimmons but lay helpless as Russell screwed it in. Then Mannion scored with a shot which Williams saved but could not hold and the bull spun into the net.

LEAGUE DIVISION ONE AT THE HAWTHORNS, WEST BROMWICH

Lionel Smith was soon prominent at left back for Arsenal and stopped Griffin several times in the opening stage. The Albion half back line was in splendid form, blotting out the visitors' inside trio.
Rickaby also played well against the dangerous Roper. Arsenal, who were well supported, never really got going although the young Welshman Jack Kelsey in goal made many fine saves.

Albion scored following a brilliant move in the fourteenth minute. Dudley put Griffin away and when his centre came over, Allen feinted to head the ball, but let it go to the unmarked Lee who scored. The hard working Ryan deservedly scored the second goal.

Kennedy was in terrific form in the air and on the ground and was Albion's outstanding player. Ray Daniel had quite a good game for Arsenal and Doug Lishman had flashes of brilliance, but none of the Arsenal players seemed to strike form in what was a relatively easy win for the Albion.

LEAGUE DIVISION ON AT THE HAWTHORNS, WEST BROMWICH

Albion brought in 17 year old Reg Cutler as deputy for Ryan who was playing for Eire in an international match. Blackpool were without Stanley Matthews, but were otherwise at full strength.
The visitors settled down to play good football from the start, but Albion could not get into their stride.In a goalmouth  scramble Barlow's clearance hit teamate Rickaby in the face and Hobson hit the underside of the bar. Dudley did the same at the other end.

Young Cutler was showing some good touches and put Lee through several times only for Shimwell to stop him on each occasion. Mortenson's speed was worrying Kennedy and the tricky Ernie Taylor beat Barlow several times. Alan Brown had two good shots go just wide for Blackpool. Half time 0-0

Straight after the interval Blackpool took the lead. Perry ran down the wing and his strong shot along the ground beat Heath.  Just as it was going wide Mortenson dashed in and tapped it over the line.
Only Dudley in defence and Allen and Lee in the forwards were on form for Albion. Nicholls was an obvious weakness and Cutler needs more experience. The Blackpool team on the other hand had not weak link. 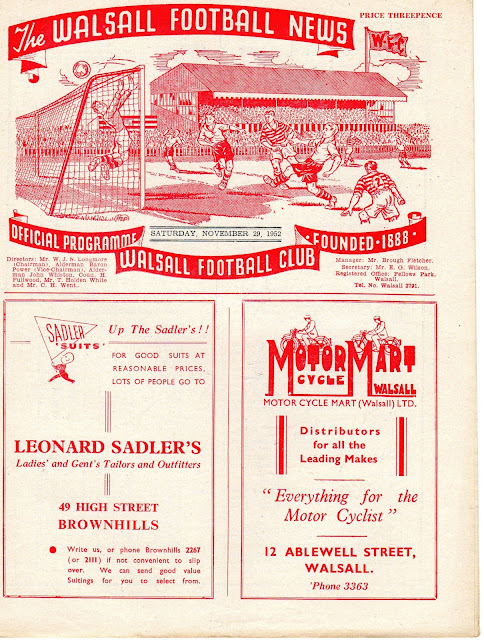 Walsall, already struggling at the bottom of the league with only nine points from nineteen games, were knocked out of the F.A. Cup in the first round last week, losing at Newport 2-1. By all accounts they were very unlucky not to get a last minute equaliser which would have forced a replay.

However the need for league points remains their priority and none were forthcoming today in very strange circumstances. Snow began to fall just before the kick off and fell throughout the match. Both teams attacked but could not get in a shot. The icy surface was proving very difficult for the players and once Chilvers fell when well out of goal. Only a last minute tackle from Les Horne, on debut after signing from Plymouth, stopped Fidler from scoring.

Horne of course is a local lad, from Dudley, and spent some time with West Bromwich Albion before joining Plymouth. He had a good game and his passing was very accurate. Chilvers made a fine save from Buchanan and punched another shot from Fidler out to Stround who centred it back to the former Leeds United centre forward, who shot into the net.

The Walsall forwards were very lively and went near several times. Hughes, from Chelsea, played a very fine game at deputy centre half for the visitors. However three minutes before half time the referee consulted a linesman and decided to abandon the match as all the markings had been obliterated by the heavy snow.

A few miles down the road the snow cannot have been as heavy as West Bromwich Albion were able to beat Manchester United 3-1 at the Hawthorns. The game was noteworthy for the debut of 17 year old centre forward Eddie Lewis for United and the following picture shows him scoring on his first appearance. 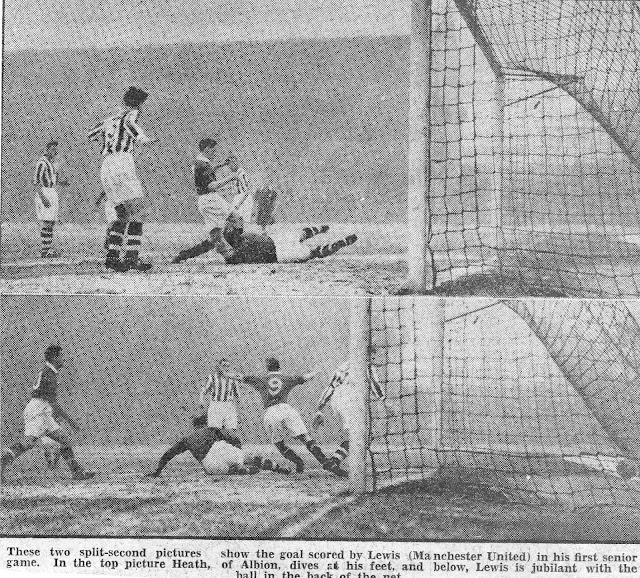