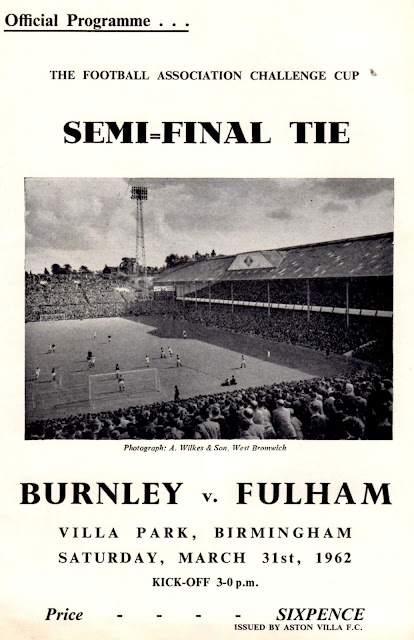 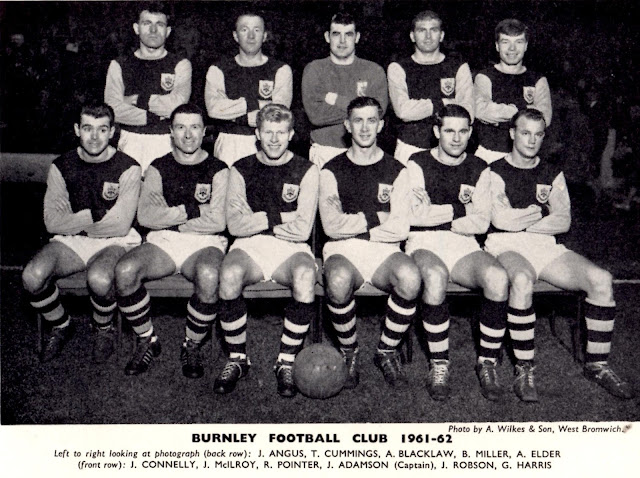 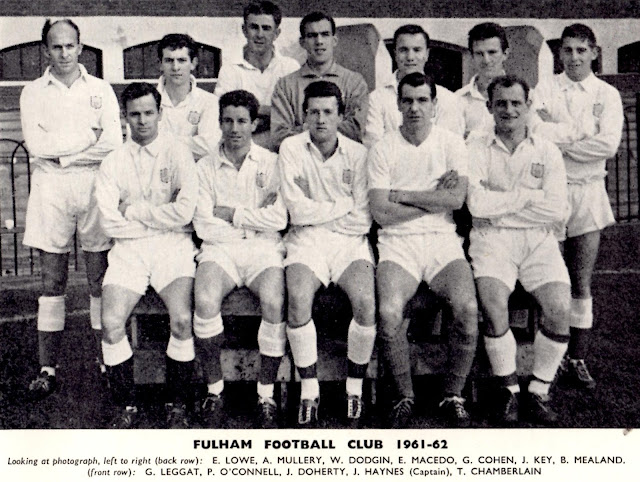 Fulham, struggling to avoid relegation, could not have imagined when they beat Walsall in a fourth round replay that they would be just one match from Wembley at this stage of the season. However here they were, but very much underdogs against the powerful Burnley side who are currently First Division leaders.

Fulham began well in bright sunshine and took the game to Burnley, who seemed strangely hesitant.
Centre forward Cook twice went close with headers, once following one of Langley's long throws and then Blacklaw made a brilliant save when Cook headed on Langley's corner. McIlroy, the brains of the Burnley attack took an early knock and had to receive treatment. This seemed to slow him down somewhat and Fulham remained on top. 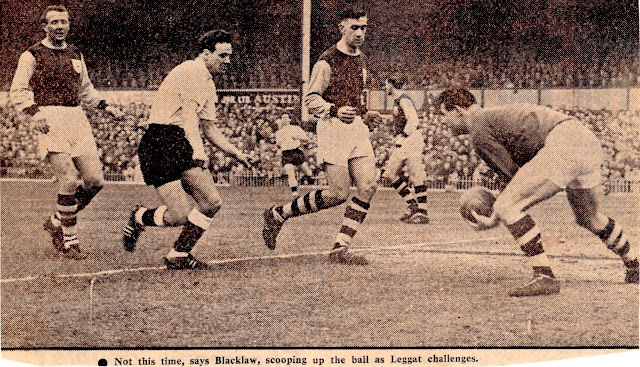 After 28 minutes as the sunshine turned to sleet Cook and Haynes combined to put Leggat through and he scored with a left foot shot from 15 yards. The pitch was now white all over with sleet and hail and the huge crowd on the uncovered Holte terrace were in for a soaking. Blacklaw was continually in action in the Burnley goal first blocking a shot from O'Connell and then sticking out a foot to stop a point blank effort from Johnny Haynes. Connelly lead two brief raids at the other end but Fulham had been by far the better side. Half time Burnley 0 Fulham 1. 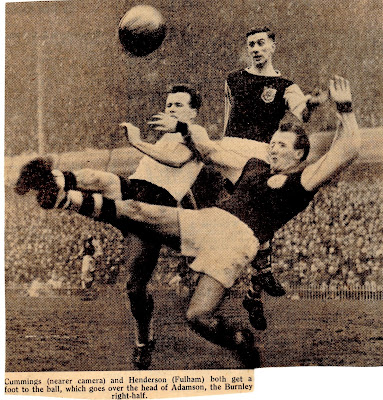 The snowstorm continued for a few minutes at the start of the second half and then to the relief of the fans it stopped. No sooner had it done so Burnley went level a square ball from McIlroy, still limping somewhat, found Connelly who scored from ten yards. Fulham came back strongly straight away as the snow began to fall again. The players were finding it difficult to keep their footing and Burnley were finding it hard going against the likes of Mullery and Cohen who both had fine games.

In the last ten minutes Burnley had two opportunities to score the winner and missed them both. First McIlroy put Pointer clear down the middle, he raced through outpacing the defenders only to finish with a drive which went just inches over the bar. The five minutes from the end Robson missed a great opportunity when he headed a great cross just wide. Fulham had been the better side throughout and must have felt hard done to with only a draw.

(The replay took place at Filbert Street, Leicester on 9th April and Burnley went through to the final by winning 2-1. Details of the Final when they played Spurs will follow later). 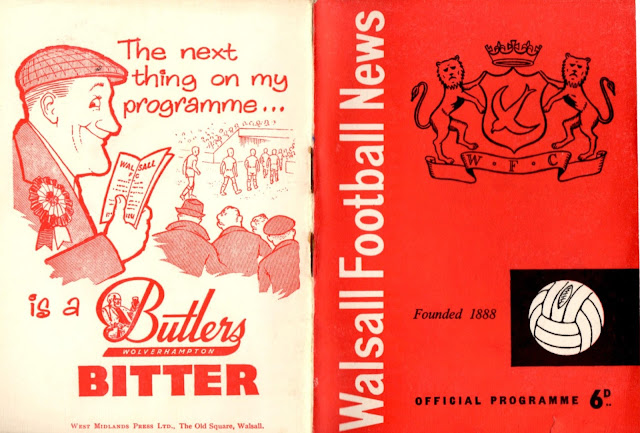 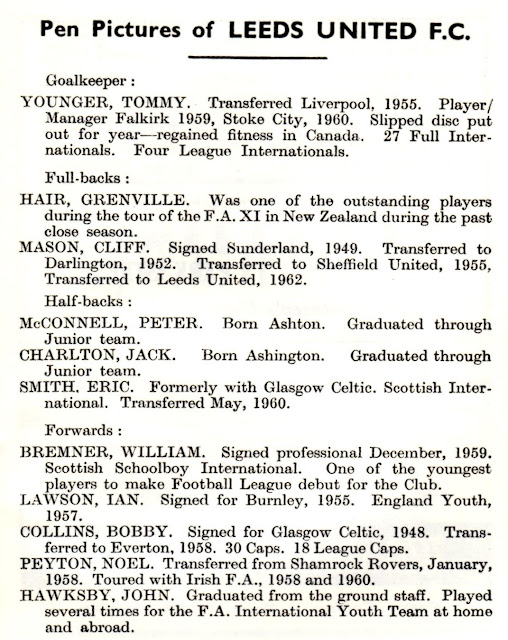 Both teams struggled to control the ball in a heavy cross wind and far too many balls were hit into the air when a pass along the ground was called for. Lowly placed Leeds were still in danger of relegation to the Third Division and their star man proved to be South African winger Albert Johnanneson, whose speedy runs down the left had the Walsall defence in trouble. Indeed with a bit of luck he could have had a hat-trick.

As it was Walsall took the lead after 24 minutes in somewhat fortunate circumstances. Taylor mis-kicked and sliced his shot across goal, where Meek collected and hit a hard shot into the net after being deflected off the diving goalkeeper. Leds came more into the game after this and Goodwin hit the post and Boswell saved well from a fierce drive by Johnanneson. Meek went close at the other end and Tommy Younger, the Leeds goalkeeper needed attention after the ball struck him in the midriff.

Younger soon recovered his breath and did well to finger tip a 30 yard swerving effort from Colin Taylor over the bar. Just before the interval the dangerous Johanneson had a great chance for Leeds. He ran onto a defence splitting pass and his hard shot was blocked by Boswell. The rebound went straight back to him but he lofted it high over the bar when he seemed certain to equalise.
Half time 1-0.

In the second half Leeds began to play the better football, despite the high wind and it was backs to the wall time for the Walsall defenders. Boswell had to race out of goal to stop Johanneson again and had to boot the ball out of play. Younger was injured again when he got a knock in the ribs as Foster tried to head in a Richards cross. Both sets of forwards struggled in the windy conditions and the game deteriorated as both teams missed several good chances.

In the 75th minute Boswell could only palm the ball out. It went straight to Johanneson who hit it back just inside the far post from a narrow angle. With Leeds now on level terms they went all out for the winner. Boswell had to push an effort from Lawson over the bar but Walsall managed to hold out for the draw despite constant late pressure from Leeds.

(Walsall finished their up and down season in a satisfactory 14th place certainly managing to hold their own in the division. Leeds finished in 19th place just three points away from relegation) 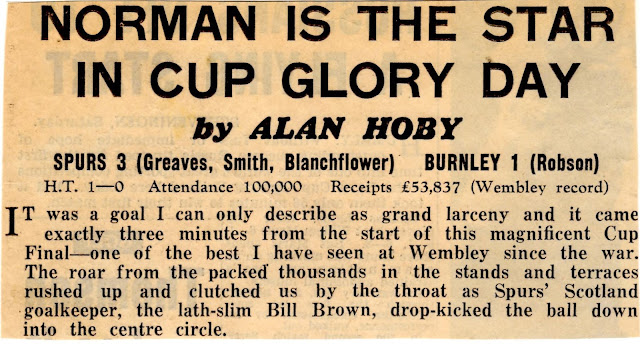 This start to the Cup Final obviously gave Spurs the edge yet Alan Hoby of the Sunday Express did not pick Jimmy Greaves as man of the match, nor did he pick skipper Danny Blanchflower whose stroking and caressing of the ball he described as sheer poetry. He also considered 'The Ghost' as inside forward John White was known and the Scottish warrior Dave Mackay known to the fans as 'The Tank'. Hoby's selection was giant centre half Maurice Norman, who in the past has been accused of defects of temperament and tecnique. Going a bit over the top Hoby said Norman bestrode the middle like a mountain peak in his task of subduing the dangerous Ray Pointer.

Goal number one for Jimmy Greaves.

So with Pointer to some extent bottled up it was left to mid field maestros McIlroy and Footballer of the Year Jimmy Adamson to try other avenues of attack. Harris hit one over the bar and Robson had a header saved with ease by the capable Bill Brown in the Spurs goal. Spurs had a scare when Mackay went down injured but the tough Scot was soon back in action after treatment. John White then tried a lob which Blacklaw saved well under the bar but Burnley were on top just before the interval and the game was by no means over. Half time Spurs 1 Burnley 0.

Five minutes after the interval Burnley were level and it was a mistake from the normally immaculate John White who tried to flick the ball to Mackay but left him stranded. Pointer was away and gave the ball to Harris on the left who turned a short pass inside for Robson to score easily. The Burnley supporters found their voice and the North had come from behind to rock the South back on it's sophisticated heels. Not for long though.

White was immediately away down the left after the kick off and floated a beautiful ball into the middle and there was centre forward Bobby Smith, with socks around his ankles, taking the ball from Tommy Cummings he went round him with a double shuffle and hammered the ball home. 2-1 to Spurs and now it was Burnley back on their heels. They came back though with Adamson and McIlroy scheming away in midfield. Connelly missed a golden chance with an open goal, then Robson missed another and even though Bobby Smith was by now limping after a fierce Cummings challenge Spurs were in control.

Eight minutes from the end a slice of luck ended Burnley's hopes. Greaves who had made little impact in the second half slipped a nice ball through to Medwin on the left, who passed it on to White. His immaculate cross found a group of Burnley defenders jumping to clear and the linesman flagged as Smith appeared to have impeded goalkeeper Blacklaw. Referee Finney ignored this signal and waved play on so Medwin shot for goal and the ball struck the unfortunate Cummings who was standing on the goal line. Referee Finney had no doubt - handball by Cummings and a penalty to Spurs. 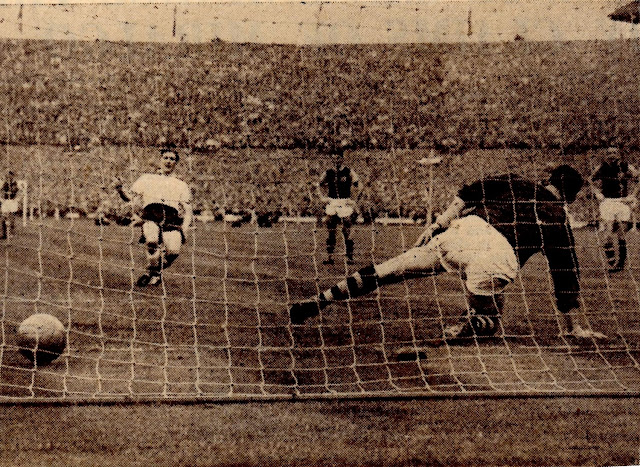 Danny Blanchflower, the Spurs captain, took the kick with his usual precision, sending Blacklaw the wrong way and the ball into the opposite corner of the net. 3-1 to Spurs and the game was all over.
Sadly Burnley had not risen to the occasion and Spurs after their double triumph last season had the confidence to perform on the biggest of stages. 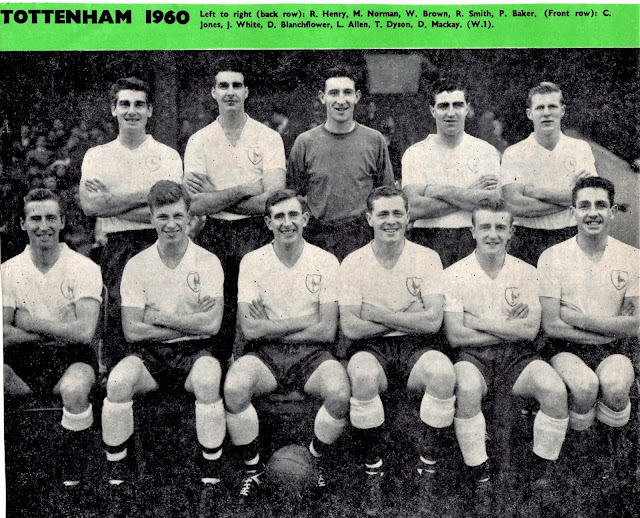