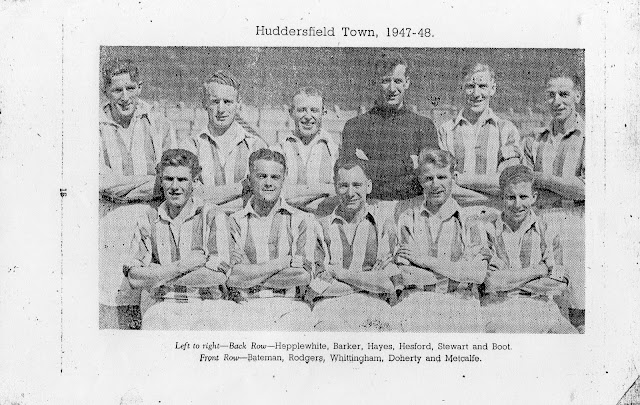 Town started the season well with a goal-less draw at Derby before the first home match against Blackpool.

Portsmouth had lost their first two games and experimentated with outside left Jack Froggatt at centre forward. Town's plans revolved around the inspiring leadership of Irish international Peter Doherty, who was largely responsible for them avoiding relegation last season. Only relegated Brentford and Leeds United finished below them.

The programme expressed the hope that Town could build a team around Doherty, just as happened many years ago when Clem Stephenson came to Leeds Road as a key man. Town's new manager this season is Mr George Stephenson, who was a much travelled player before the war but not quite as famous as his brother.

Portsmouth were the better side, but a piece of luck gave them the first goal after only two minutes, when a pass hit the referee in the Town penalty area and was diverted to Barlow who scored easily. Froggatt scored the second goal to clinch the points for Portsmouth.

Town were hustled and bustled out of their stride by a speedy Portsmouth side, but tempers began to fray on both sides and after centre half Hepplewhite had spent 15 minutes in the dressing room, due to an injury, the game degenerated into a very unpleasant exhibition!

This game was followed by two home wins, 3-1 against Chelsea and a resounding 5-1 thrashing of Grimsby, who were to end up relegated ( yes Grimsby were once a first division side!). Two home draws with Sunderland and Liverpool followed together with an amazing 5-1 away win at Bolton. Things seemed to be looking up, especially when Town drew 4-4 away from home with the very strong Manchester United. 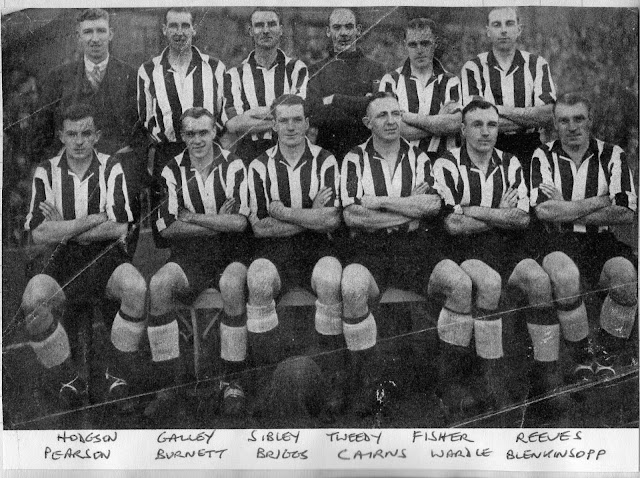 Town showed clear superiority throughout against a poor side. It was a good display showing nice directness and snappiness by the Town players which has been rarely equalled.
Raymond Dring, a Lincolnshire school teacher, showed good handling and positioning in goal and appears to have few serious faults. Town only led 3-1 with fifteen minutes remaining, but then goals by Glazzard and Whittingham emphasised their superiority. Grimsby looked a poor team which was confirmed at the end of the season when they were relegated.

A poor game partially excused by the absence of both side's star players through injury. Peter Doherty
was missing for Town and Billy Wright for Wolves. Jesse Pye scored the only goal.

Sunderland were well on top during the first half, with their left wing pair of  Willie Watson (up against his brother Albert) and Reynolds taking the eye. The cool, immaculate Watson kicks a football with as much thought as he make a cricket shot for Yorkshire. His wing partner, the diminutive Reynolds, who must be on the verge of an England appearance on this performance, scored both first half goals. The second, two minutes before half time, flew like lightning past Hesford's head. Half time 0-2.

Centre forward Davis missed two sitters, as Sunderland should have gone further ahead, but Metcalfe eventually found his way round full back Stelling to lay on a goal for reserve Thompson and then got the equaliser himself after sixty eight minutes. Indeed with the exception of wing half Wright and goalkeeper Mapson, the Sunderland defence really went to pieces in the second half. However overall they remained the better team and only Whittingham and Metcalfe matched their high standards. Pick of the town defence was steadily improving full back Barker who rarely puts a foot wrong.

Town were on top for most of the game but were thwarted by weak finishing and the powerful goalkeeping of Sam Bartra. Charlton took the points thanks to a Bill Hayes own goal in the last minute which marred an otherwise excellent performance. The full back tried a back pass to goalkeeper Hesford, but lobbed it over his head as he stood stranded several yards out of his goal. 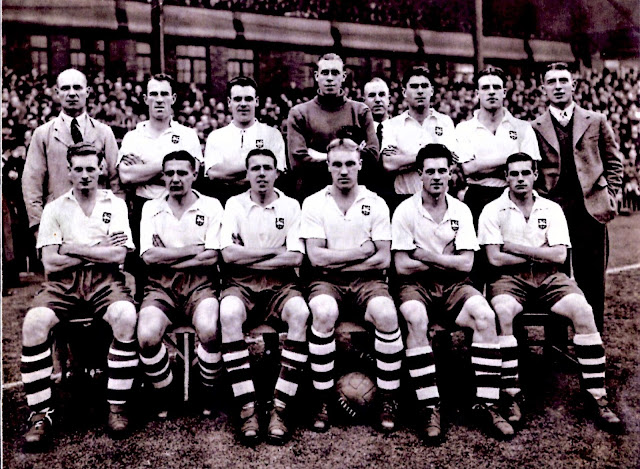 
Town returned to Leeds Road after a brilliant 4-4 draw last week with Manchester United at Maine Road, in front of a 60,000 crowd. Scorers were Glazzard, Doherty 2 (1 pen) and Bateman. After today's match Tom Finney left with his leg strapped up after a very hard game. Huddersfield won the points thanks to a Bateman goal just five minutes before the end. Despite a stiff wind, the game fulfilled expectations because all the players touched the heights of the three internations, Finney, McLaren and Doherty. However Stewart the Town reserve centre half, normally a full back, started shakily but finished confidently. He said his new position was easier than full back. Hayes who had his best game of the season and Leslie Smith, who continues to improve at right half, had a lot to do with breaking up North End's attacks. Both goalkeepers were outstanding - Gooch had more saves to make but Hesford saved his fourth penalty of the season, not only saving Shankly's kick but McLaren's shot from the rebound. 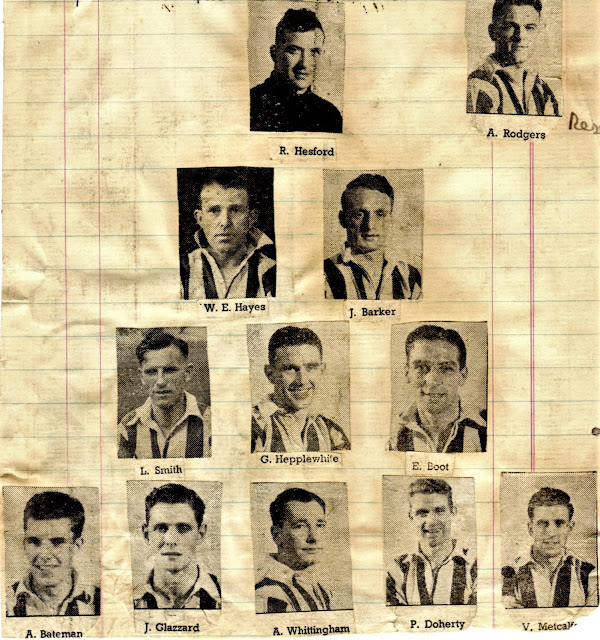 Town should have won by a bigger margin as United's defence, particularly on the left and at centre half, was not as good as last season. Apart from Forbes and goalscorer Jackson (the wing halves), they looked a poor side and their best player Hagan had an off day. Town were strong in defence and approach but woefully weak near goal. Doherty took a Metcalfe pass and created a goal for Whittingham before scoring the winner from a flashing centre by Bateman, who had his best game of the season.

This game was played just twenty four hours after yesterday's 1-1 draw at Maine Rd.
The year came to an end with no immediate threat of relegation for Town, thanks largely to the £10,000 invested in the purchase of Doherty a year ago. However Black gave City the lead after only eight minutes and City's wing halves and inside fowards kept the ball on the ground in the high wind. They tackled fiercely and used the ball astutely. Sproston used his head, to save his legs, with good positional play keeping Metcalfe under control. A good defence was completed by the inimitable Frank Swift, England's goalkeeper and powerful left back Westwood.
Town were more hesitant and less accurate, but they would not give up on a bitterly cold, windy and rainy day and deserved marks for that. Whittingham, who headed the equaliser two minutes from the end in the grand Tommy Lawton manner, like Doherty has earned his transfer fee many times over. Town are more pleased with the form of young right half Leslie Smith, at the moment the most improved player in Yorkshire.

Hot news - my youngest grandson, Neil who is six, wrote an account of Derby County's recent game for his homework the other day. Another blogger in the making.