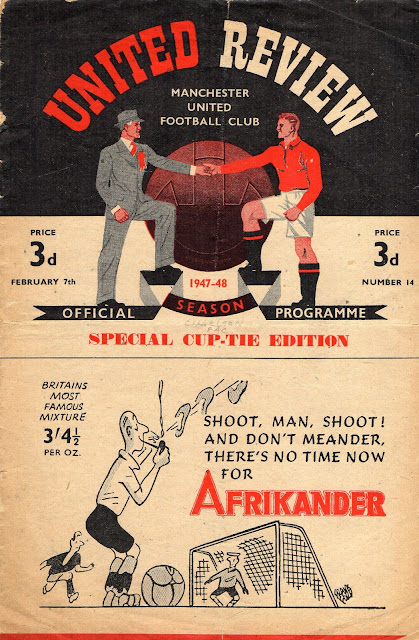 As both Manchester clubs had been drawn at home and were sharing the Maine Road ground due to wartime bomb damage at Old Trafford, the tie was moved to Huddersfield, thus enabling the unfortunate Town supporters to see two top class teams.

United had already beaten Aston Villa 6-4 away in an epic third round tie and then Liverpool, at home, 3-0 in the fourth round. The cup holders Charlton, who had beaten Burnley 1-0 in last year's final, were never really in with a chance of progressing further this time.

Little was seen of last year's Wembley hero and goalscorer Chris Duffy who was played out if the game by the immaculate John Carey.

Sam Bartram in the Charlton goal saved his side from a heavier defeat. On a muddy ground United played football of a type seldom seen in this competition. They played superbly as a team and their fast forwards and supporting wing halves overwhelmed Charlton.

The handwriting below this picture is my own, at age 11. My web designer and technical adviser is the same age and thinks his handwriting is better. His teachers may disagree! 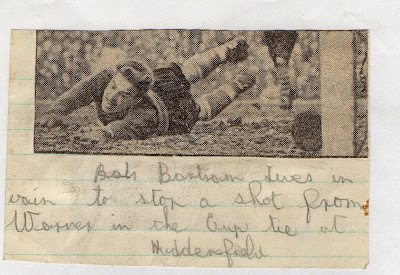 Bartram was unlucky when Warner's 25 yard drive was deflected out of his reach and again he had no chance when Delaney on the right sent over a fast low centre which Mitten, cutting in from the left wing, headed like a bullet into the net.

United have put together a formidable team with an international flavour. Apart from their Irish captain, Carey,  Warner is a Welshman and Jimmy Delaney the Scotsman from Glasgow Celtic also looks a useful acquisition. In addition all the other United forwards must be candidates for England honours in the not too distant future.

This was how I remember it, with some help from newspaper accounts of the time. It was of course significant that United went on to win the cup, beating Blackpool 4-2 in an eventful final at Wembley, thus gaining their first trophy of the Busby era. 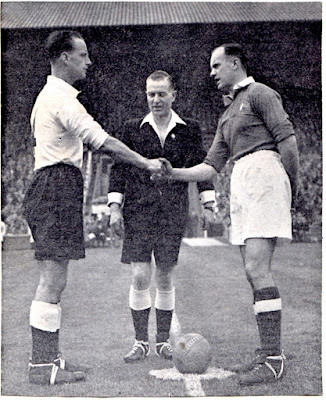 
Twenty years later, Busby was still there and at some future date I will publish my account of the greatest night in his career when United became the first English side to win the European Cup.

This game left a lasting impression on me and over sixty five years later I can still reel off the Manchester United team without any hesitation! 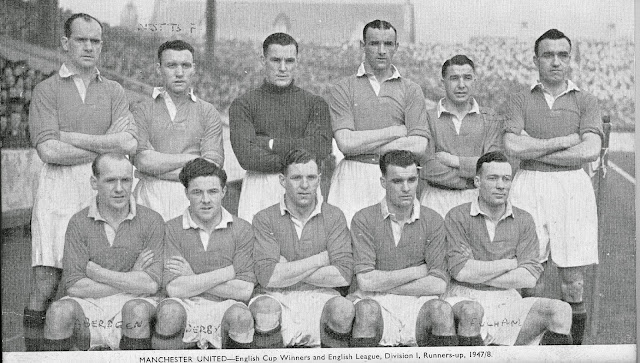 Partisans made a terrific din with bells and rattles when Manchester United and Charlton appeared at Leeds Road, Huddersfield in the fifth round of the F.A. Cup. The attendance at the start was about 36,000. The game started five minutes before schedule to avoid a transport clash with that from Fartown rugby league ground after the match. The ground was sodden with heavy rain. Manchester United played in blue jerseys and Charlton in white. United were the first to become dangerous through Pearson. They forced a corner and Morris had a good shot blocked. Hurst broke away at the other end where Crompton ran out and intercepted the winger's centre at the expense of a corner.

Severe United pressure followed good work by Delaney and Morris. The former placed a beautiful
centre into the goalmouth. Charlton's defence was covering weel. McCrae made a good effort to break through for the Cup holders, but was held up by force of numbers. After Delaney had deceived the Charlton defence he parted to Rowley who missed by a yard. A moment later Rowley forced Bartram to save brilliantly at full length. United were playing great football and Charlton's defence was having a tough time. WARNER beat Bartram with an angled shot from about twenty yards out in the twenty seventh minute to put United in front.

BACKS TO THE WALL

United were the faster and more enterprising side and deserved their lead. Delaney forced Bartram to make two more saves in hurricane United attacks. The Cup holders had certainly their backs to the wall at this stage. Bartram tipped a Pearson drive over the bar for another corner. Mitten was causing Charlton a lot of trouble on the left. After Hurst had led an isolated Charlton raid Johnston was only inches high with a good shot. A clever movement in which Mitten and Rowley figured saw the last named force Bartram to make a brilliant saved. United were playing with dash, skill and confidence.

Charlton forced the pace when play resumed, but they could find no loophole in United's defence. Soon United were at Charlton's end. Mitten fired in a terrific shot from thirty yards which sailed inches above the crossbar. Rain was now falling heavily and United had it behind them. The pace slackened a little after Bartram made two more saves to keep Charlton in the game.

Mitten forced a corner and a good shot by Rowley was rather luckily intercepted. Soon afterwards Mitten essayed another shot only to see Bartram bring off yet another fine save. In a Charlton raid McCrea had a good opportunity but he shot wide. MITTEN finally scored the clinching goal for United five minutes before the end of the game.