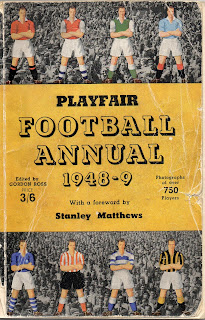 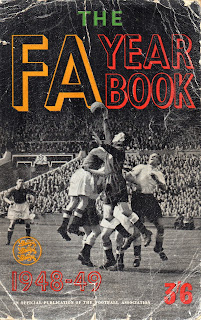 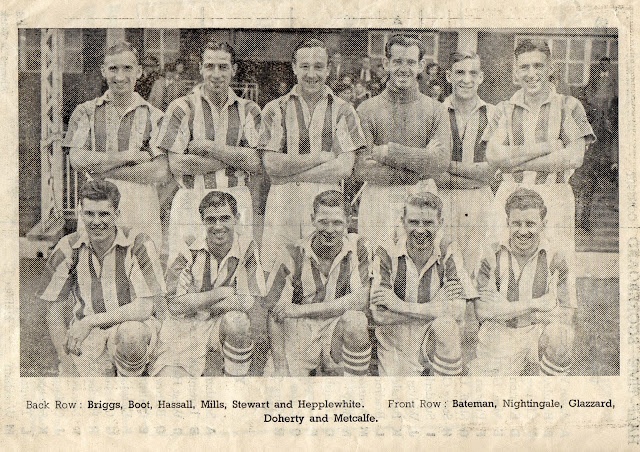 Town started the new season with the same forward line, but a few changes in defence.
Mills who had taken over from Hesford in goal in the latter part of last season continued, but with two new full backs in front of him. The veteran Irishman, Bill Hayes had retired and Geoff Barker had joined Midland League club Scunthorpe United. The first home match was against league champions Arsenal. 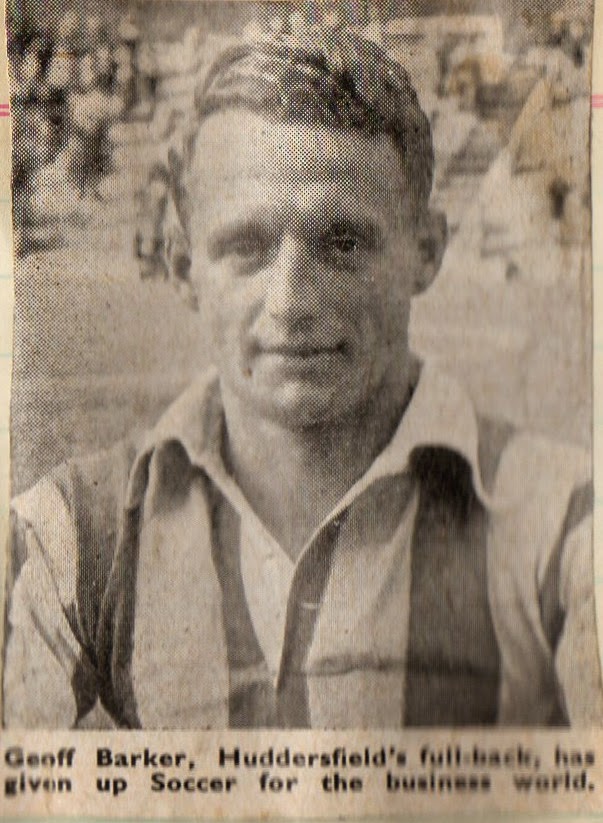 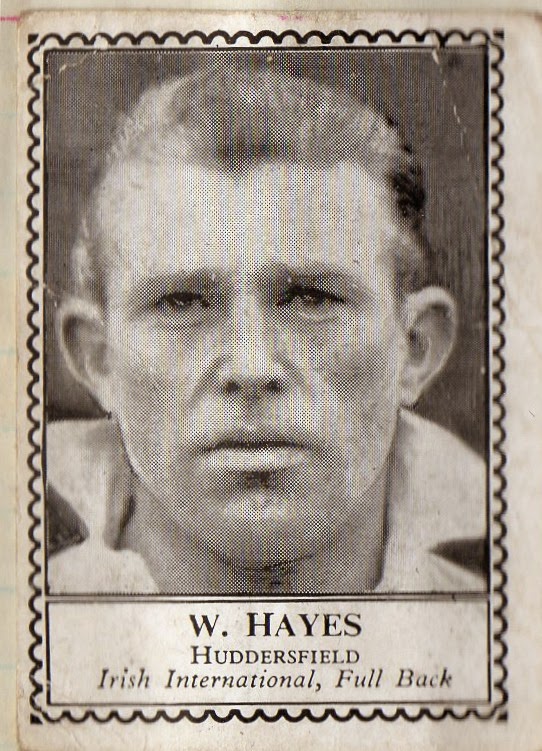 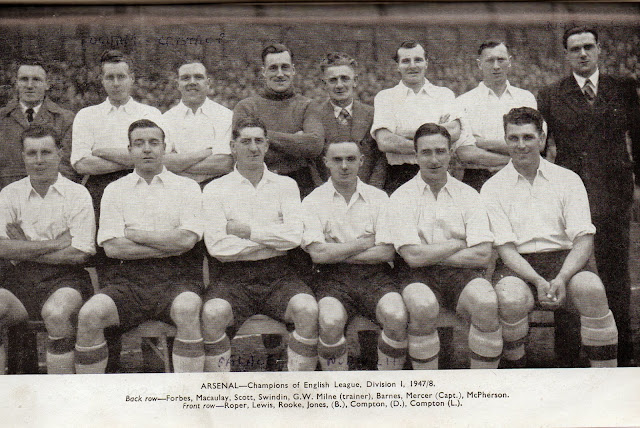 Town did well to take a point from the league champions who were without regular centre half, Les Compton, and inside forward Reg Lewis. Fields did a good job at centre half and Alex Forbes was moved into the forward line from his usual wing half spot. Whittingham played at right half instead of his usual centre forward role, but still managed to put Town ahead during the first half. However Arsenal came back in the second half and Ronnie Rooke, who scored 33 goals last season, got the equaliser. 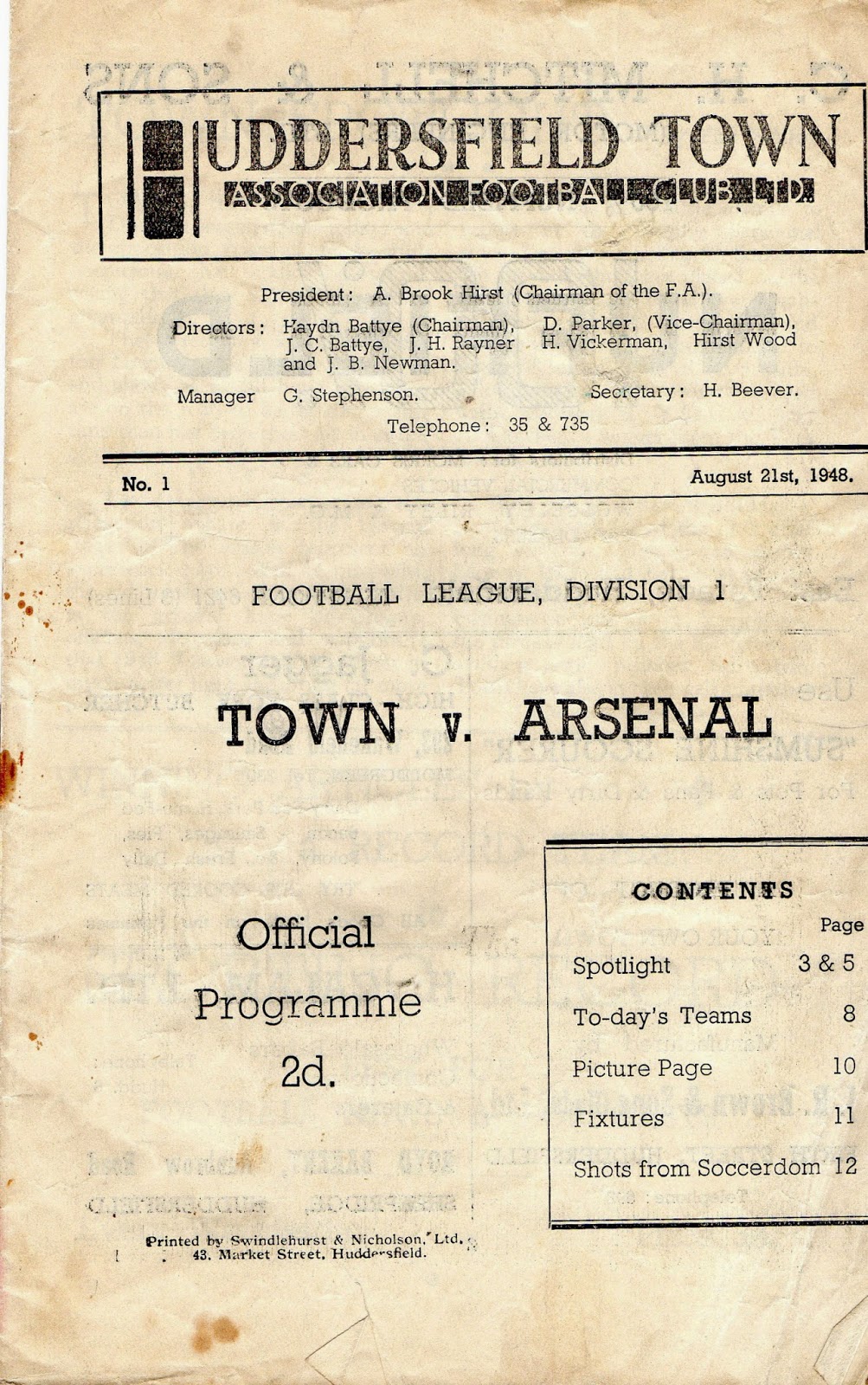 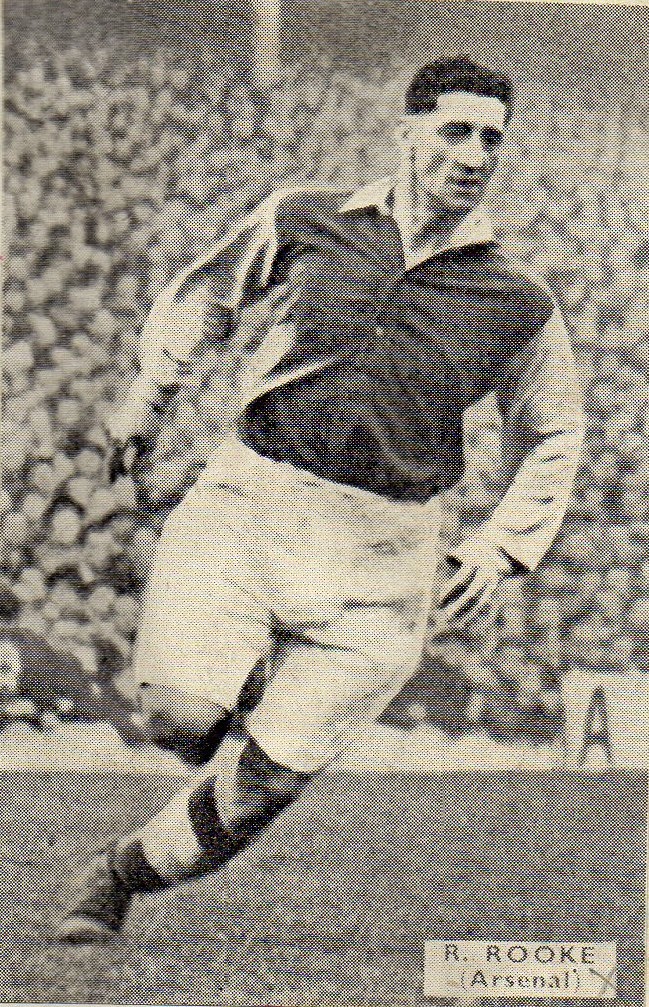 Yorkshire Sports match report.
Arsenal were penalised in the first minute for an infringement on Peter Doherty, Hepplewhite put the ball into the goalmouth. Arsenal only partly cleared and the ball cam out to Bateman whose shot missed the target. An Arsenal raid was held up by Boot. Then Metcalfe led Town back to the attack, with two fine dribbles, and Doherty hit the woodwork with a powerful shot.

After five minutes Whittingham opened Town's account with a header from Bateman's centre - a fine goal. Before this Rooke got the ball into the net, but the whistle had gone for off side. Town were playing well and it was with difficulty that the champions stopped Bateman and Metcalfe on the wings. Glazzard was brought down a few yards outside the penalty area and exciting moments followed before a free kick brought Arsenal some relief.

Good work by Logie and Roper, backed up by Macauley caused Town some anxiety . Briggs and Stewart stood up well to their task, but Town were fortunate when McPherson failed to connect with a perfect centre from Roper. More was now seen of Arsenal as an attack force. Eventually Boot, who was playing a good game, took Town out of their difficulties. Doherty carried on the good work, only to be stopped by Barnes.

Arsenal's movements were characterised by clever footwork, but they found progress difficult against a tenacious defence. Town's youngsters were standing up well to their work. Neat work by Forbes might have yielded something but for a clever piece of defensive work by Hepplewhite, who came across and robbed Rooke at the right time.

After a period of quiet play, Arsenal came more into the picture and Mills brought off a good save from  Rooke after McPherson had centred. Once more Doherty was fouled, and exciting moments followed in front of the Arsenal goal before Glazzard headed a foot wide. Half time 1-0.

After brisk midfield play, Boot and Doherty went down to the Arsenal end and Metcalfe tried a long shot which Swindin easily gathered. Arsenal raided and looked dangerous until Rooke was pulled up for off-side. Town attacked again through Glazzard, but eventually forced the equaliser late in the game. 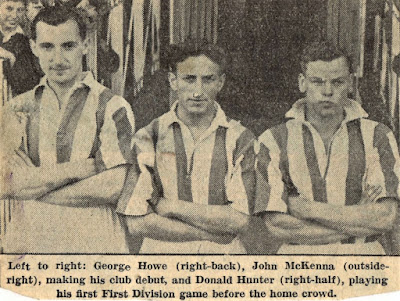 Huddersfield obtained their second point of the season, having lost two away matches, at Derby (4-1) and Charlton (3-1) since the game with Arsenal. They have still to find a settled team and full back George Howe and outside right John McKenna recently signed from Irish club Linfield, were making their debuts. Wing half David Hunter and inside right Conway Smith, son of the famous pre-war winger, Billy Smith, were also brought in.
McKenna, small and tricky looks a useful acquisition, but the full back weakness still remains. Peter Doherty, Town's Irish international skipper, scored his first goal of the season after nine minutes of the second half against his former club, following a move started by McKenna. Derby probably have two of the best inside forwards in the game in Raich Carter and Billy Steel, last season's signing from Greenock Morton. Derby led at half-time with a goal from reserve centre forward Thompson after 26 minutes following a defensive blunder, but missed their regular number nine, Jack Stamps.
Town were the better team in the second half, although they did not give Glazzard the ball on the ground enough. He was well beaten by Leuty in the air and full back Mozley played Metcalfe out of the game.
The early evening kick off (6.15) and Town's poor start to the season was perhaps responsible for the reduced attendance. 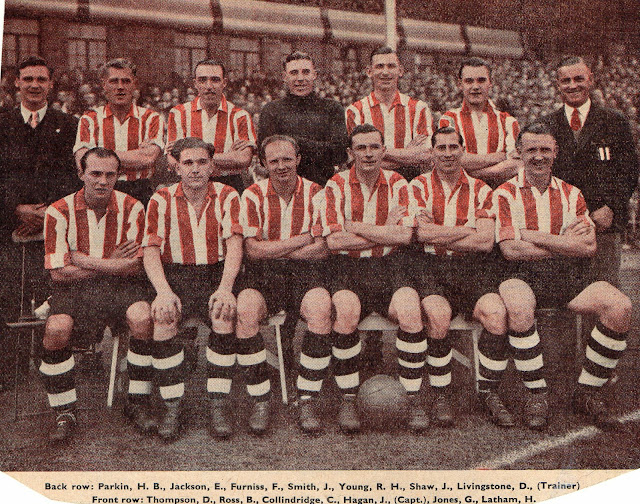 A much changed Town side with new goalkeeper Jack Wheeler taking over from the injured Harry Mills, veteran Irish full back Bill Hayes coming back out of retirement and Whittingham taking over from Glazzard at centre forward. Having had a surprise victory at Bolton on Monday night, in which centre half Hepplewhite scored, Huddersfield must have felt confident. Particularly as Sheffield United had lost 5-2 to Sunderland on the same night. However it developed into a very poor game, with few scoring chances and Albert Nightingale could not impress against his former teamates.

Apart from Doherty, the only other Town player who tried to use the ball was the lively McKenna, but he was generally unsupported.. Town might have won in the closing minutes had Glazzard looked where he was shooting and if veteran goalkeeper Smith not brought off a miraculous one handed save from Metcalfe. Hayes and Briggs both had a bad second half, mistiming and slicing the ball with yards of room to work in. Neither goalkeeper could be faulted even if the bulk of their work was on keeping out nervous defensive back passes. Collindridge was the most dangerous attacker for United and Latham earned commendation for his reliability at centre half.

Yorkshire Sports match report.
A clever tackle by Latham prevented Glazzard going through in the first minute. Metcalfe put over a good centre which United cleared. Hagan led an attack on Town's goal but off-side held up the movement. Town pressed and after good work by Hayes, Metcalfe and Boot, goalkeeper Smith had to dive to save a risky back pass from Furniss.

Play was fast and open. The first thrill came when United made a determined assault. Brook was left with a good opening but he shot wide. McKenna forced a corner for Town and in the next minute, Hagan and Collindridge took part in a delightful movement which ended with the ball going out of play. A clever tiangular movement between Young, Hagan and Colindridge looked like producing results until Hayes cleverly intercepted a pass from Collingdridge and made a good clearance.

After Wheeler had made another fine save from Collindridge, Glazzard dribbled cleverly only to finish with a week pass to Metcalfe. Mckenna again put Town in an attacking position by beating Parkin, and the send the ball over to Metcalfe, who ran strongly before centreing. Doherty's first time shot was unsuccessful. A few minutes later Smith dived to save a great shot from Doherty. H.T. 0-0.

Soon after the resumption Town made a great effort which nearly succeeded. McKenna and Doherty got the better of the United defence with skilful interpassing, and then Doherty put the ball across the field to Metclafe who hit first time. Smith made a brilliant save, injuring himself in stopping the ball. He soon recovered. Before this, United had been active on the left. United's shooting power was better than Town but all to no avail as the game ended goal less. 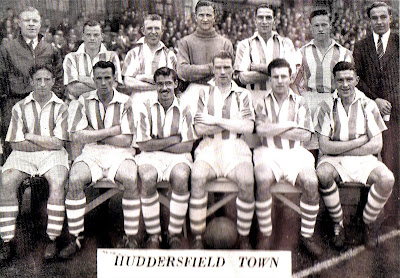 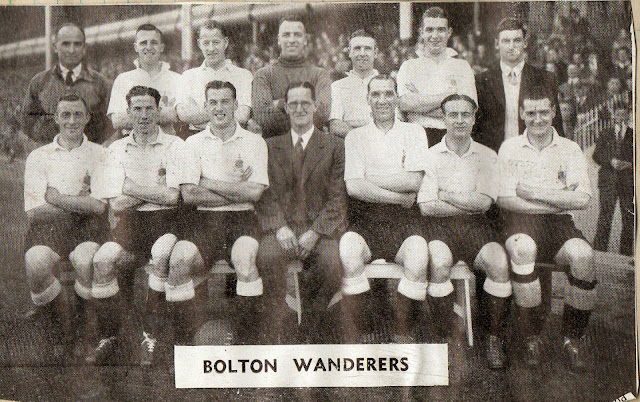 Town must have been confident after their recent 2-1 win at Burnden Park, but after a goalless first half, two goals from Scottish inside right Willie Moir sent the small crowd home unhappy. It was my first sight of the great Nat Lofthouse, a powerful centre forward, who was to spend his entire career at Bolton. His exploits for England in a famous victory in Austria earned him the nickname of  ' The Lion of Vienna'.
Also in the Bolton side was the small Scottish left winger Harry McShane, who had one season at Huddersfield just after the war and later moved on to Manchester United.
He had a bit of a fiery temperament and I recall him going head to head with Town's no nonsense centre half George Heppelwhite who was several inches taller.
To put the attendance figure into perspective, there were seven other first division games on the same evening and the next smallest crowd was at Preston where they had 31,000. With only one win (at Bolton) from eight matches so far it looked like a hard season ahead for Town.