The summer of 1949 - I remember it well. As a twelve year old having completed my first year at grammar school, all seemed well with the world. We spent the first few days of our summer holiday visiting my mother's friend in Hull, where I watched two days of Yorkshire v Hampshire at The Circle. Then we were off to Whitby for a week.

While there my father set off on the train for a job interview in Birmingham, of all places. To his delight, and my displeasure, he got the job, which was quite a big step up in the world of local government.

So I was only to see another half dozen or so games of football in Yorkshire before departing to live in Walsall, near Birmingham. It took me eighteen years to return north, but the chief plus point for me was the number of football clubs within easy reach of my new home. I did the rounds of them all, shared in their triumphs and disasters, as well as playing football myself first in the Walsall Minor League, against such luminaries as the Wolves 'D' side and then in the Birmingham Amateur Football League.

However, back to business. Huddersfield Town, after their narrow escape from relegation started the new season with renewed optimism. They got off to a poor start with a 4-1 defeat at Blackpool, but I decided to break new ground and spent the first Saturday of the season at the Shay, Halifax. 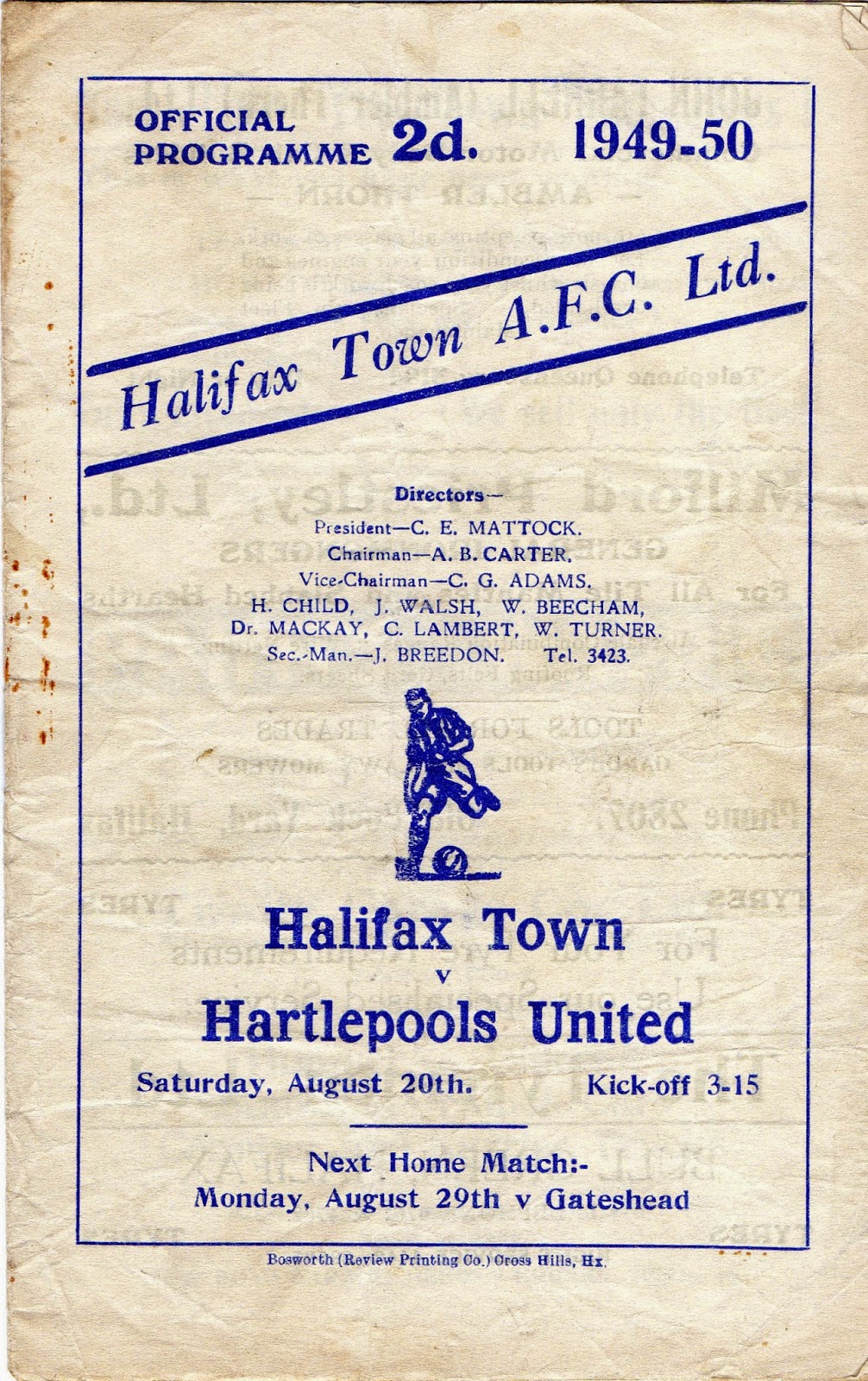 All that I can remember about this game was the remarks of a neighbouring spectator, with a broad Yorkshire accent, who spent the whole game disparaging not only the players of both sides, but the referee and linesmen too. He was a bit like the well known comedian of the time, Al Read. He kept shouting at the linesman 'Off side, off side'. To which his straight man replied 'He's put his flag up'. Then the classic retort 'Yes, but not till I shouted'. The programme featured a note of encouragement by stating that the last time Hartlepool won at the Shay was in season 1846-47! Not sure whether this was a misprint or not.

Halifax were unlucky to lose to an own goal by the unfortunately named Mycock, who also scored for his own side, and having two goals disallowed to the intense annoyance of our complaining spectator. Two of their players, Massey and Hinsley, were injured and may miss the next match.

Town's new look side included recent signing from Manchester United, Ronnie Burke, who was unable to get a regular place  at Old Trafford. Harold Hassall was promoted from the reserves and veteran Eddie Boot was in the unacustomed position of right back.

After a poor first half, the game was transformed three minutes after the interval with a splendid self made goal by Nightingale, who pounced on a long ball from Boot. Arthur Rowley, who often troubled Hepplewhite, returned the compliment within two minutes. The burly, dashing and enterprising centre forward outwitted two or more defenders  and finished with a powerful drive which left Mills well beaten.

After 65 minutes Thomas put Fulham ahead to rouse Town who hammered away at the Fulham defence for the rest of the game. Finally just six minutes before the final whistle, Hassall scored a brilliant equaliser. When a high ball came over from Burke, he jumped to volley it home, a goal reminiscent of Peter Doherty (now with Doncaster) at his best.

Newly promoted Fulham looked a good team and were full value for a point in an entertaining match, watched by many who had spent the day watching county cricket between Yorkshire and Gloucestershire at Fartown, before walking down to Leeds Road at the close of play.

Town ended a busy first week of the season, unchanged from Wednesday night and continued their encouraging start with another 2-2 draw. Hassall again impressed with another brilliant,individual goal.Town were 2-0 up within half an hour when Burke scored his first goal for the club. Mannion had a hard time during the first half with young wing half David Hunter having a good game. In the second half Mannion came into his own and it became a different story. He was able to lay on goals for the two Scotsmen  McCrea and the powerful McKennan. 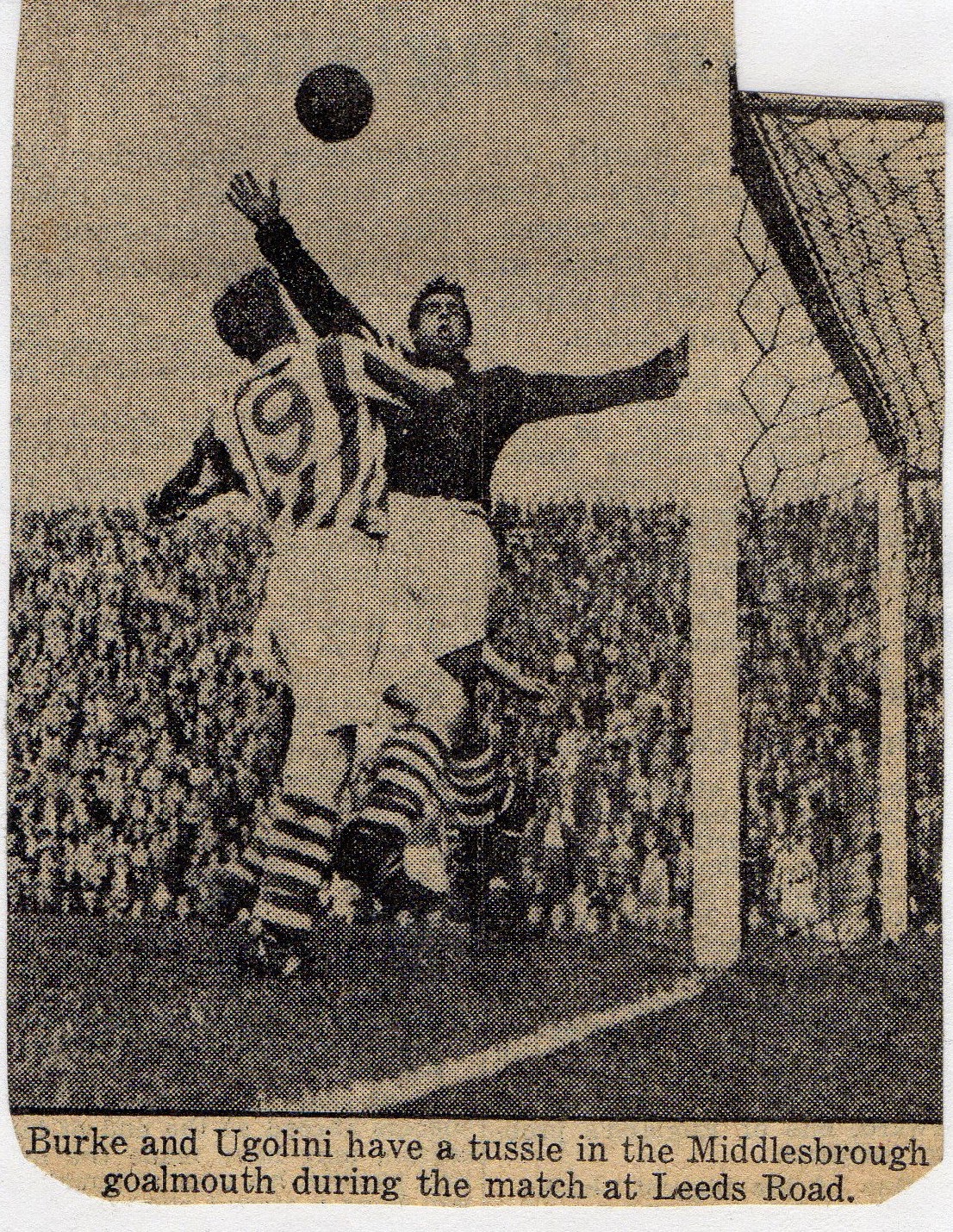 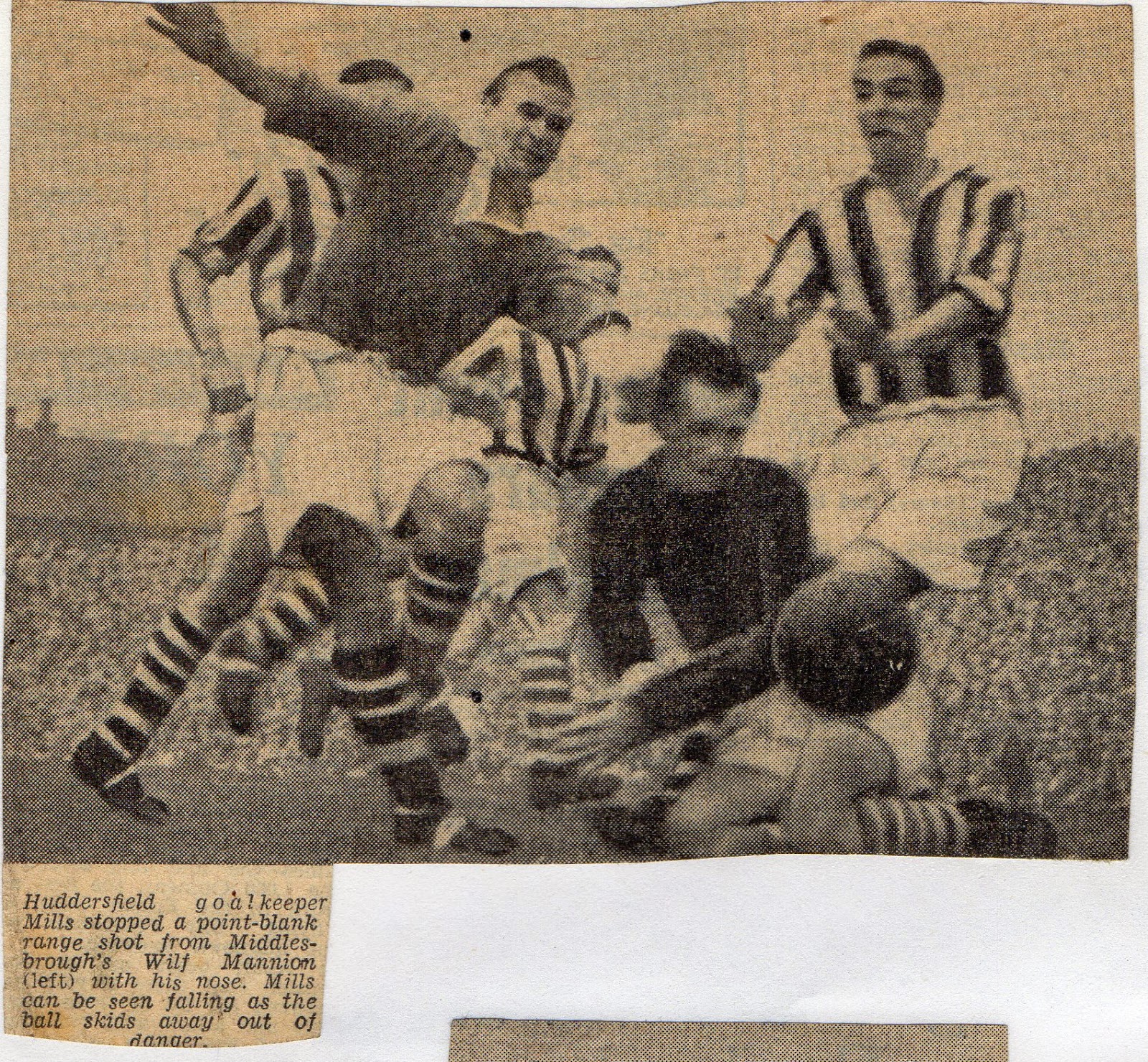 My first visit to Walsall, as my parents were on a house hunting week, from which I was either excused or escaped. However the Saddlers looked a poor team who will struggle on their strange three sided ground, bounded by a laundry wall and chimney behind one goal and behind the laundry was a railway line. Very different from Leeds Road and it may be that my affections may be transferred elsewhere before very long. 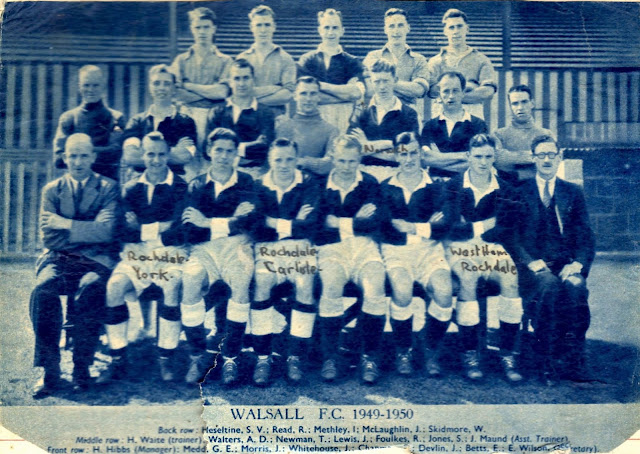 LEAGUE DIVISION ONE AT THE HAWTHORNS WEST BROMWICH

It took me longer than expected to make the relatively short journey between Walsall and West Bromwich by a combination of buses, so that I only arrived a few minutes before kick off. The ground was already crammed full, particularly the terrace behind the goal at the Birmingham Road end, where I had great difficulty in finding any sort of vantage point. The newly promoted home side put up a good performance and have some very useful players, notably the two Irishmen Vernon in defence and Walsh in attack, as well as the tricky right winger Billy Elliott who scored their only goal.

Arsenal have a very strong side, particularly in defence with big Leslie Compton a commanding figure at centre half. I had hoped that his brother Dennis might appear on the left wing, but apparently he was still playing cricket. Arsenal's next match was at Huddersfield the following Saturday, a game which I missed, presumably as we were travelling back from the Midlands.

It turned out to be yet another 2-2 draw with Burke and Glazzard scoring the goals, as they had done a few days earlier in the midweek win at home to Charlton 2-1.

Town, with a much changed side due to injuries did well to hold the League Champions to just one goal. Hesford, after a long absence, re-appeared in goal, George Howe was tried in the problem right back position and Percival made a rare appearance at centre half as deputy for George Hepplewhite. Burke and Hassall were also missing from the forward line. Portsmouth's strength lay in their powerful half back line which dominated proceedings. 'Ike' Clarke, the former W.B.A. player, scored the only goal. 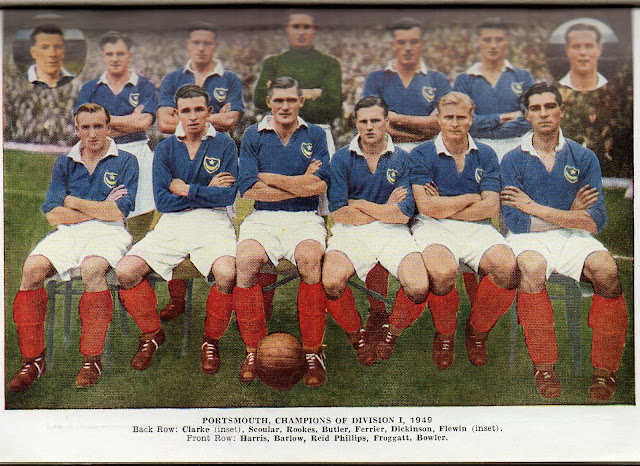